The second component of the national quantum strategy is enhancing competitiveness by accelerating technology development toward useful economic and mission applications of QIS and working with international partners, while also protecting national security. 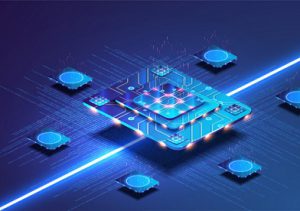 The Quantum Economic Development Consortium (QED-C) is an industry-led consortium of stakeholders that aims to enable and grow the U.S. quantum industry. QED-C was established with support from the National Institute of Standards and Technology (NIST) as part of the Federal strategy for advancing quantum information science and as called for by the National Quantum Initiative Act enacted in 2018. The mission of QED-C is to enable and grow a robust commercial quantum-based industry and associated supply chain in the United States.

Today, QED-C has support from multiple agencies and a diverse set of industry, academic, and other stakeholders. QED-C participants are working together to identify gaps in technology, standards, and workforce and to address those gaps through collaboration. 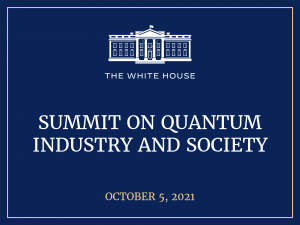 On October 5, 2021, the White House Office of Science and Technology Policy (OSTP) National Quantum Coordination Office (NQCO) convened industry stakeholders from across the country to discuss how quantum computers and quantum sensors will benefit American society. Challenges and opportunities for increasing United States competitiveness in this critical industry of the future were also discussed.

The summit included a roundtable discussion with Executive Office of the President representatives and leaders from quantum information technology companies. The roundtable focused on understanding the applications of quantum information science, the barriers for transitioning quantum R&D concepts into products or services in a global market, and the potential societal impact of quantum technologies.

More information about the summit can be found in a press release. 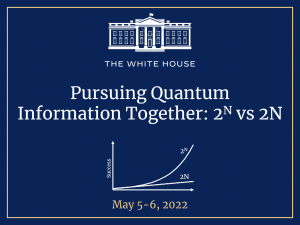 In May 2022, the National Quantum Coordination Office and U.S. Department of State hosted an international roundtable, Pursuing Quantum Information Together: 2N vs 2N, to foster international cooperation in quantum information science and technology (QIST). The roundtable gathered the heads of quantum strategy offices from the United States, Australia, Canada, Denmark, Finland, France, Germany, Japan, the Netherlands, Sweden, Switzerland, and the United Kingdom to reinforce the importance of international cooperation in QIST to accelerate discovery, share resources, and jointly address global challenges. A readout of the event is available here.

As an output of the roundtable, the nations launched the Entanglement Exchange, a portal for highlighting international exchange opportunities for students, postdocs, and researchers in quantum information science.

Scientific knowledge transcends national boundaries. International collaboration accelerates discoveries and provides an avenue to deepen relationships between nations. Accordingly, it is U.S. policy to promote and support international cooperation on QIS research and skills development, especially in ways that affirm principles of scientific rigor and research integrity, freedom of inquiry, merit-based competition, openness, and transparency. International collaboration is facilitated through a number of mechanisms. Bilateral agreements between U.S. agencies and their international counterparts can enable benefits such as a coordinated review process, reciprocal or joint funding, and student and researcher exchange to the benefit of both parties. In support of such ideals, the United States has been party to several cooperation statements focused on quantum information science and technology. 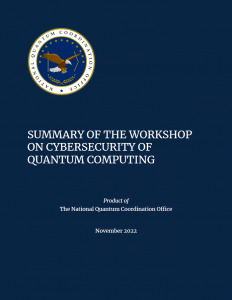 Participants noted that in cybersecurity, the best practice is to design systems with security in mind, rather than waiting until systems are developed to incorporate security considerations. They expressed the view that research programs that address the cybersecurity of quantum computing should be launched while quantum computers are still nascent. Breakout teams composed of both security and quantum computing experts identified research opportunities. Participants lauded the opportunity to engage early in discussions about quantum computer security, and they agreed that there are interesting and important research problems in this new field.

A summary of the workshop is available here.