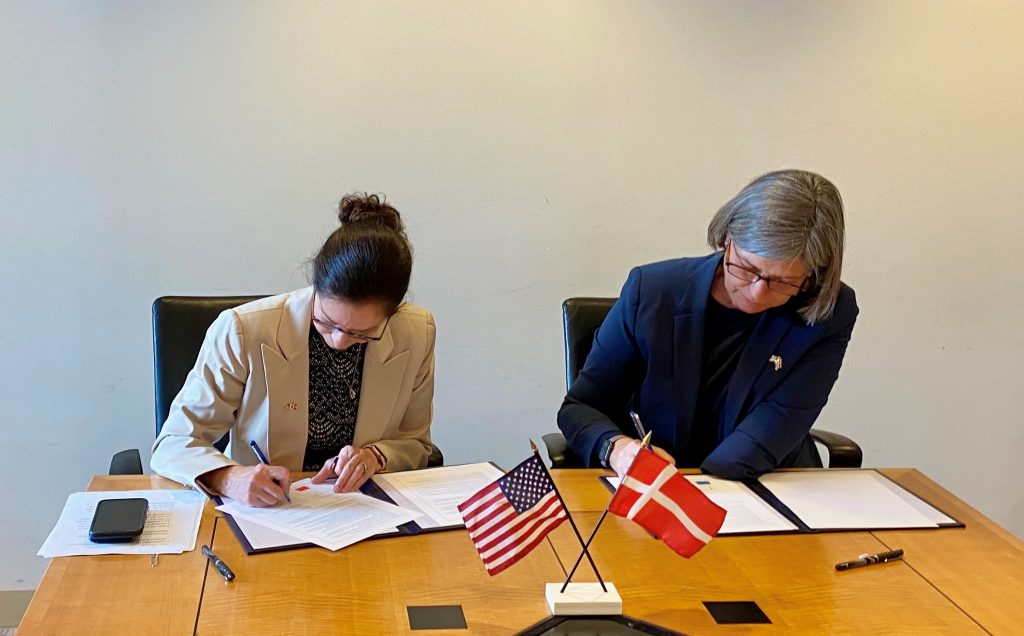 Leveraging both countries’ strengths in QIST, this cooperation statement will strengthen the supply chain, grow the industrial base, and educate future generations of quantum talent.

The joint statement builds upon a long and rich history of scientific engagement between both countries, including the 2009 US-Denmark Science and Technology Agreement.

Monica P. Medina, Assistant Secretary of State for the Bureau of Oceans and International Environmental and Scientific Affairs, signed the joint statement in Washington for the United States. “The potential applications of quantum information science and technology are endless,” said Medina. “But we can only explore that potential by working together. I am thrilled to affirm our commitment to enhance quantum cooperation with Denmark, grounded in shared principles.”

Lone Dencker Wisborg, Ambassador of Denmark to the United States, signed the joint statement in Washington for Denmark. “Quantum has the potential to mitigate some of the world’s greatest challenges, including climate change,” said Wisborg. “However, quantum could also change the nature of conflict, and its strategic importance will continue to increase. That is why it is crucial that democratic governments take the lead in ensuring the responsible development and use of quantum technologies. With the Joint Quantum Statement and after the meeting between Secretary Blinken and Foreign Minister Kofod last week, Denmark and the United States confirm our shared ambition of working even closer together – now also on quantum and issues related to technological development.”

QIST is evolving rapidly. Quantum computers have the potential to solve specific problems that are intractable for current computers. These could include a wide range of application areas, such as health, communications, transportation, and renewable energy technologies. International partnerships are key to unleash the enormous potential of quantum technology. They will make it possible to combine the required expertise, ingenuity, and creativity in order to expand our fundamental understanding of QIST.

Both the United States and Denmark recognize the importance of QIST to the future prosperity of their countries. In the United States, the government has made significant investments in developing QIST, resulting in programs and policies that include workforce development through the National Q-12 Education Partnership, 13 QIST research centers, and a strong industry consortium.

Similarly, Denmark has a strong research and education environment in the field of quantum due to the legacy of Niels Bohr’s pioneering research and considerable investments in basic research and research infrastructure. Building on this, and in order to remain a frontrunner, Denmark is developing both a new strategy for quantum research and a broader cross-government quantum action plan. The plan aims to strengthen Danish quantum research, innovation, and the entire quantum ecosystem in Denmark. International cooperation with trusted partners, both public and private, will be a key element.

Charles Tahan, the Assistant Director for Quantum Information Science in the White House Office of Science and Technology Policy, and Director of the National Quantum Coordination Office said, “Solving the hardest problems in quantum information science will require strong international cooperation. The signing of the United States – Denmark quantum cooperation statement will reaffirm our two countries intent to work together to overcome the major obstacles in this field.”