Getting the Science Right

The first component of the national quantum strategy is getting the science right by understanding the applications and timelines by which QIS will benefit society, and the roadblocks we must overcome to get there. This involves establishing research infrastructure such as national QIS research centers, enhancing core programs that have funded research in QIS for decades, and other activities.

The National Quantum Initiative Act calls for the NSF and DOE to establish new Centers focusing on QIS research and discovery. In alignment with this goal, NSF announced the Quantum Leap Challenge Institutes solicitation and first round of Awards. DOE announced the National QIS Research Centers funding opportunity FOA and Awards. These Centers bring together multidisciplinary teams to tackle some of the most complex and urgent problems in quantum information science and engineering. With connections to universities, national laboratories and industry, these NQI Centers will explore quantum frontiers, stimulate QIS technology development, and expand QIS training opportunities. NQI Centers compliment core programs and other center-scale efforts that connect with QIS. In addition, the National Defense Authorization Act for FY 2020 authorized the Department of Defense to explore establishing additional Research Centers to accelerate quantum information science and technology. 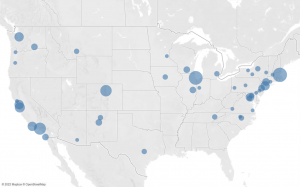 The 13 major NQI research centers and their affiliates. Core programs, which span much of the rest of the United States, are not shown.

The National Quantum Initiative calls for strong QIS R&D programs at all levels. Core programs from several disciplines, with efforts both small and large, helped get the field of QIS where it is today. They explore a diverse range of platforms and approaches, and nurture a culture of discovery. Substantial programs for individual investigators, teams, hubs, and Center-scale efforts are supported by several U.S. Departments and Agencies.

Links to some core programs: 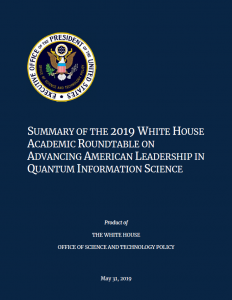 On May 31, 2019, the White House Office of Science and Technology Policy (OSTP) National Quantum Coordination Office (NQCO) convened a wide-ranging group of more than 25 key academic leaders and educators who prioritize QIS R&D for The White House Academic Roundtable on Quantum Information Science. The group exemplified the diversity of the U.S. academic community, with representatives from women’s colleges and Historically Black Colleges and Universities (HBCUs) joining representatives from state-wide systems and private institutions to discuss efficient, original ways to innovate and mutually support QIS efforts.

Summit attendees participated in a set of dialogues focused on QIS academic programs currently offered around the country, best practices to establish Institutes and Centers to advance QIS, and identification of challenges and opportunities that experts foresee in connecting basic research to innovators and entrepreneurs. A panel of innovation experts worked with the group to examine parallels between their experiences creating, funding, and supporting innovation in emerging technologies, and the activities and approaches that are being developed now to foster innovation in QIS.

More information about the roundtable can be found in an event summary. 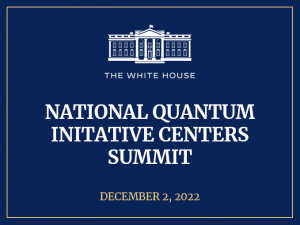 On December 2, 2022, the White House Office of Science and Technology Policy (OSTP) hosted the thirteen National Quantum Initiative (NQI) and National Defense Authorization Act (NDAA) research centers to discuss the most pressing scientific and workforce challenges affecting quantum information science (QIS), as well as the impacts and benefits of the field for all of society.

The summit convened three roundtables. During the first, each center described their mission, major scientific impacts, as well their approaches to building multi-disciplinary research teams, engagement with industry, and education and outreach. Two themes emerged from this roundtable: (1) a science-first approach to QIS is still paramount, and (2) the importance of growing and diversifying the quantum workforce.

A press release is available on whitehouse.gov.