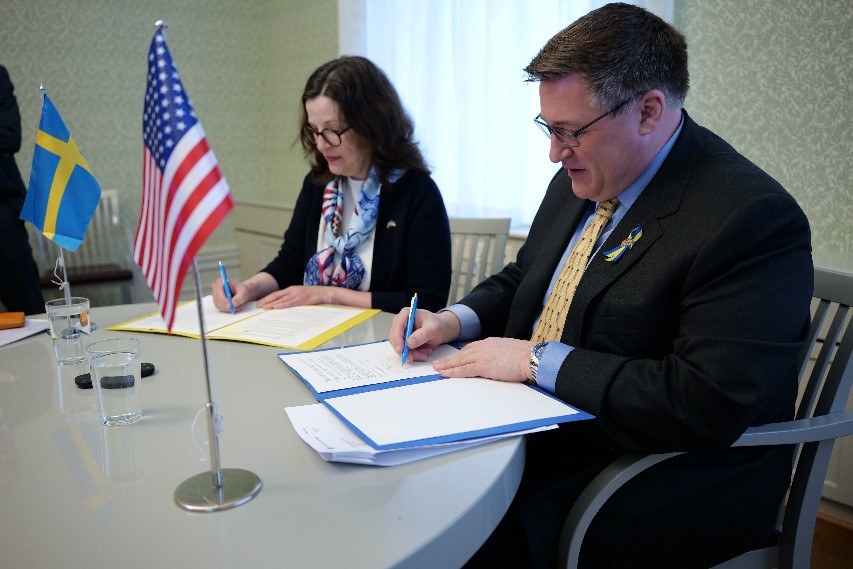 Photo by Ulrika Westerberg at the Government Offices of Sweden.

Anna Ekström, Minister for Education, Ministry of Education and Research, signed the joint statement in Stockholm for Sweden. She said, “In Sweden, there are several research environments with world-leading research in quantum technology. By making a joint statement that we want to collaborate in the quantum field, Swedish and American researchers get the opportunity to collaborate with the best researchers in this field in our two countries. It contributes to strengthening our position as leading research nations.”

In recent years, the two countries have poured resources into QIST. In the United States, the 2018 National Quantum Initiative led to the creation of 13 QIST centers to carry out research and development, the National Q-12 Education Partnership to stimulate the next-generation quantum workforce, and an industry-led quantum consortium. In Sweden, a SEK 1 billion center spanning multiple universities was established in 2018 to create long-term cutting-edge expertise in quantum computing, simulation, communication, and sensing.

Samuel Engblom, State Secretary at the Swedish Ministry of Education and Research, said “This common statement is another opportunity for close collaboration between researchers in our two countries. Working together will also support the development of the next generation of scientists and engineers in quantum and other technologies.”

The Joint Statement advances the shared agendas of both countries to engage in good-faith cooperation in QIST, such as to build a global market and supply chain, and to create respectful and inclusive scientific research communities.