The State of Quantum

Roughly each month I write “from” a different research center about the NQCO’s progress coordinating Quantum Information Science (QIS) activities. Learn more about the NSF Center for Quantum Networks at https://cqn-erc.org.

In January, the White House Subcommittee on Quantum Information Science (SCQIS) and the National Quantum Coordination Office (NQCO) released the first annual report of the National Quantum Initiative (NQI). Officially called the NQI Supplement to the President’s FY 2021 Budget, these reports are required by the NQI Act. The Supplement captures the budget growth in QIS research funding and highlights QIS technical and programmatic achievements across the Federal government’s QIS efforts since the passing of the NQI Act in 2018.

As a critical emerging technology, QIS research and development (R&D) continues to enjoy strong support from Congress, Federal agencies, and the White House. Despite challenges imposed by the pandemic, 2020 was a great year for quantum. At this point, all of the big asks of the NQI Act, such as new national-scale QIS research centers and a quantum industry consortium, are up and growing. The Q-12 education partnership now exists. Most importantly, amazing research continues. A big thanks goes out to everyone in our community who made this possible.

While the NQI Act authorized specific actions for the Department of Energy (DOE), the National Science Foundation (NSF), and the National Institute of Standards and Technology (NIST), the National Defense Authorization Acts (NDAAs) of 2019 and 2020—which legislates DOD R&D activities—also created a new framework for the DOD QIS research program. This included allowing for the designation of DOD QIS research centers such as the Naval Research Laboratory and the Air Force Research Laboratory’s Innovare Advancement Center. The National Security Agency’s (NSA) Laboratory for Physical Sciences (LPS) also announced its Qubit Collaboratory. These are great additions to the national effort. An NQI Community Meeting capped-off the year, providing a venue for all the major QIS research centers, as well as industry members of the Quantum Economic Development Consortium (QED-C), to get to know one another.

The National Strategic Overview for QIS continues to provide high-level policy objectives for the national QIS program: take a science-first approach, build the quantum workforce, invest in the critical infrastructure, nurture the nascent quantum industry, balance the economic and security implications of quantum science (ESIX), and cooperate internationally. The coordinating bodies within the Executive Office of the President are working to augment this overarching strategy.

Even as we get more enthusiastic about quantum technology, we need to focus on the hard technical challenges first (including discovering applications) to fuel the next level of investments. Our science-first approach will serve us best in the long run. In quantum computing, for example, 20 years of significant research investment has enabled researchers from around the world to deploy newly developed quantum algorithms on small-scale quantum computers, which themselves are based on several different qubit realizations. However, I would not be surprised if it takes at least another decade to see this exploratory work transition to deployable, commercial applications.

Although each Federal agency funds research supporting its own mission, some challenges especially benefit from cross-agency cooperation. Consider quantum networking (QN). We define quantum networks as those with the ability to send quantum information (qubits) between quantum devices. But closely related are the fields of quantum communications and post-quantum cryptography. Communications protocols such as quantum key distribution (QKD) explore using quantum effects to secure communication and can be considered a sub-field of QN research. On the other hand, post-quantum cryptography (which is in active development) uses classical cryptographic algorithms to protect communication against future quantum computers.

QN is still very much a research area. We know that in the long term we will want quantum networks that connect quantum computers. We may find benefit in connecting quantum sensors through quantum channels as well. In this kind of situation, it is best to pool talent and resources, focus once again on the hard problems first, and invest in the right kind of exploration and prototype development. Finding applications and understanding the resources needed to realize them is critical and must be weighed against investments in (perhaps) unnecessary infrastructure. The recent Quantum Networking report captures the policy recommendations made by a team of technical experts and leaders from across the government. Both DOE and NSF have released recent funding opportunities to advance QN research.

With this context, I’m fortunate this month to be able to highlight one of the country’s QIS research centers that is focused on quantum networking: the NSF Center for Quantum Networks (CQN) led by the University of Arizona. CQN’s vision is to develop the prototype devices, repeaters, and network architectures to support sending 10 million qubits worth of information per second between multiple locations, serving multiple applications, at the same time. Just to be clear, that is really hard! (Perhaps comparable to building a quantum computer in the first place.) The CQN is comprised of 10 institutions and 28 principal investigators, plus many more students and postdoctoral researchers to advance this foundational science while maintaining close relationships to industry and leading international centers advancing quantum networking technologies. As CQN and additional QN programs make progress, I’m especially excited to watch the advancement of the core components needed for quantum networks – such as quantum transducers and quantum memories – that will enable all quantum technologies. 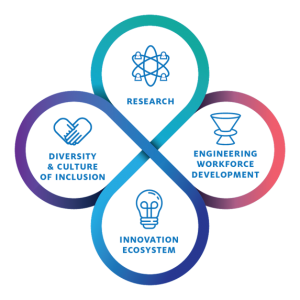